Cavaliers moving on to a 4 year institution:

Two teams and 23 individual athletes from Kankakee Community College have been awarded NJCAA honors for academic achievement during the 2020-21 school year. The awards were formerly called Academic All-American.

The All-Academic First Team members, with a 4.0 grade point average, are:

Check out their team schedule page for a list of all home and away games:

Kankakee Community College police officer Vernal Turner does a lot of walking around the college. In his second job, he runs the sidelines as a basketball official.

In spring 2021, Turner will be inducted into the Illinois Basketball Coaches Association Hall of Fame for his work as an official. For 17 years, Turner has been an Illinois High School Association official.

He currently officiates for the Northern Athletic Conference, Chicagoland Collegiate Athletic Conference and the College Conference of Illinois & Wisconsin. For eight seasons, Turner has been an official at NBA training camps for the Milwaukee Bucks and Chicago Bulls. In 2019, he became a court side administrator, working for the NBA.

Among the noteworthy high school games he has officiated are seven Chicago city championships; three IHSA boys basketball championships (3-A in 2013, 4-A in 2014, and 3-A and 4-A in 2019); and the McDonald’s All-American game in 2016. He will be the first person to have played in IBCA All-Star Game (1981), officiate the IBCA All-Star Game (2016), and be inducted into the IBCA Hall of Fame.

In all, there will be more than 100 new IBCA Hall of Fame members, including nine officials. Due to COVID-19, the IBCA has not finalized its plans for an induction ceremony.

At KCC, Turner has been a part-time police officer since 2015. 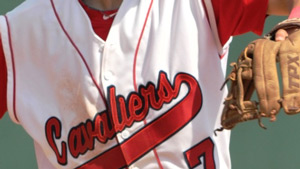 Todd Post started his college coaching career at Kankakee Community College in 1993 as an assistant baseball coach. During his seven years as assistant (1993-2000), the program won three Sectional and three Region Championships. Coach Post took over as the head coach for the 2001 season. Since that time, the Cavaliers have won 16 Sectional Championships and two Region Championships. At the National Tournament, Post’s teams finished third in 2009 and won the NJCAA Div. II National Championship in 2017. Overall, Post’s record as KCC head baseball coach is 791-356 (.684). Since 2008, Post’s teams have averaged at least 43 wins per season through the 56 game regular season. During Post’s tenure as head coach, more than 150 players have transferred to four-year institutions to complete their degrees, and 12 players have signed to play professionally.

The Cavaliers are coming off a 42-17 season and a 3rd place finish in the Region IV Tournament.

The 2017 NJCAA DII National Championship was a great accomplishment for the players and the program. We continue to have the same goals for our program, which include preparing our players academically and athletically to be successful at the 4-year university, compete for a Region IV Championship, and win 40 games each season.

The freshman will definitely play a key role in the success of this team. They are led by shortstop Cole Stigleman, who has a dependable glove and a lethal bat. Corner infielders Jaret Humphrey and Michael Machnic will provide some thunder to the middle of the lineup. Nate James also provides a solid middle infielder and a left-handed bat. Outfielders Koltan Moore, Griffin Scaggs and Nate Vargo will also impact the lineup for the Cavaliers. Catcher Nick Anderson provides depth behind the plate or off the bench as a pinch hitter.

On the mound, the team will look to Freshman Nick Laxner, Owen Behrens, Bobby Nowak, Aaron Ball, Jacob Duffy and Tyler Jasmin to solidify the starting rotation. Nolan Lebamoff, Jake Schueter, Tanner Walls, Max Minich and Ike Speiser will compete for innings out of the bullpen.

“We have talent and depth on the pitching staff and will be able to look to multiple players for success this season,” says Head Coach Todd Post. “Pitching and defense is our focus and being consistent in both areas will give us a great chance to win the Region IV Tournament in May.”

The early season for the Cavaliers consists of a 10 game schedule opening up with John A. Logan on the way to Myrtle Beach for the spring trip March 1-9 at the Ripken Experience.

Congratulations to our 3 Athletics All Americans:

Congratulations to two of our athletic teams for being recognized by the NJCAA for their academic excellence. To be recognized the team must have a combined GPA of 3.0 or higher.

Congratulations to our Academic All Americans. These athletes received a 3.60 or higher GPA.

Congratulations to Baseball’s Bryce Butler for being named to the NJCAA DII All American 2nd team.

His individual achievements for KCC during the 2018 season are as follows:

Bryce will be attending Catawba College in North Carolina.

The new athletics Facebook is now live. Please follow us for updates on teams, scores, and happenings in the athletic department at Kankakee Community College.

Congratulations pitcher Brennan Kelly on your Gold Glove Award! This national honor is awarded to the best fielding percentage per position in the NJCAA DII. Brennan fielded a PERFECT 1.000 for the 2018 season!

The Athletics Department is thrilled to introduce our brand-new website!

This site allows us to interact more than ever before through live social media feeds, news stories, and more. Please share a link to https://athletics.kcc.edu so friends and prospective students/athletes can stay up-to-date with our athletic programs.

We have improved site navigation so you can find details for both fans and athletes. We’re sure you’ll also notice the pictures are big and bold! Take a look around and you’ll plenty of other helpful information.

Thanks for visiting! Please let us know if you have any feedback.

Baseball Comes to a Close

Baseball finished the season with a Sectional Championship and a record of 42-17. The Cavaliers fell short of the National Tournament losing to McHenry County 6-3. KCC wants to wish all of the sophomores the best of luck as they move on in their athletic and educational careers.